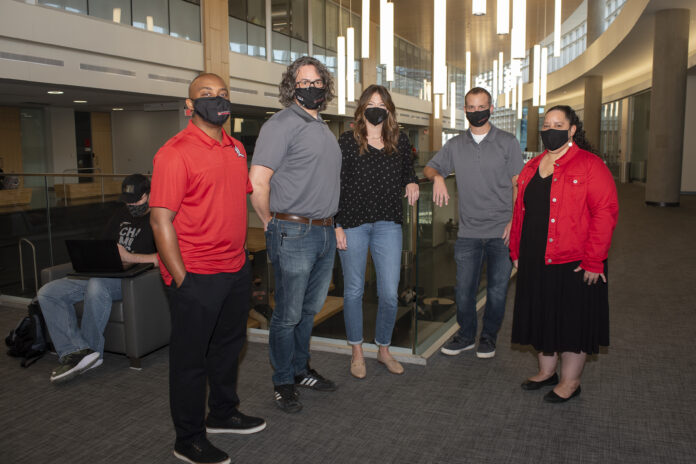 One arrived as an undocumented immigrant. Another couldn’t afford to replace broken eyeglasses. A third, the granddaughter of a University of Louisville custodian, needed a final boost after an 18-year academic journey.

Introduced in fall 2014 in the Office of Enrollment Management, the Student Success coordinators joined the new Student Success Center in the Belknap Academic Building when it opened in 2018. The first staff member, Greg Vittitow, now assistant director, was tasked in 2014 with helping to identify and intervene with freshmen at risk of dropping out. What could UofL do to support them in reaching their academic goals?

Since then, the team’s staff has grown to five and it has awarded more than $1.5 million in small grants to 1,053 students. The grants average $1,500 and often are used to help students who have a financial barrier preventing them from graduating or registering for the next semester. But they can help with life’s basics, too.

In one case, a small grant helped first-generation student Jackson Roney purchase a new pair of glasses when his broke during his freshman year.

“I was holding my glasses up to my face because I couldn’t see at all. I would have dropped out,” said Roney, who was in the second semester of his first year at the time and had no family or insurance to help him. He had spent his entire savings on textbooks. “I was beaten down. I had no money because of books. It hindered my education because I couldn’t see, even if I was sitting at the front.”

Roney, 20, is now a junior studying political science, philosophy and sociology. His goal is to go to law school. He feels a special bond with Anika Strand, the Student Success coordinator who continues to support him with advice on things like finances but, especially, offers mentorship.

“We want to see students be retained from semester to semester if that’s what’s in their best interest,” said Vittitow, adding that often when students come in, there is usually more than one problem that has to be addressed. Many students the center sees are first-generation and need guidance navigating college. Some may have no family support and need a cheerleader.
“The need has always been there but we’re now getting referrals from around campus. We’re becoming more known around campus for what we do. At the core of what we do, we care about them and their well-being.”

One of Vittitow’s students, Estrella Flores, arrived at UofL from Bowling Green, Kentucky, in 2016 as an undocumented immigrant with $20 in her pocket and a $1,500 scholarship. She had come to the United States at age 2½ with her parents.

Flores, now 23, originally set out to become a nurse, but recently changed her major to organizational leadership and learning with a goal of working in the automotive industry. Through the years as she has struggled with financial and academic challenges, Vittitow has offered support, advice and encouragement. She received her green card in 2019.
“He has been a great mentor for me,” she said with tears in her eyes.

In December, 37-year-old Lenora Bradley crossed the commencement stage at the KFC Yum! Center after an 18-year quest to earn her bachelor’s in sociology. A single foster parent of two teenage girls and adoptive mother of one, she is now enrolled in the Kent School of Social Work and is pursuing a Master of Science in Social Work.

She credits the Student Success Center with the financial help and support she needed to finish her bachelor’s degree. Her adopted daughter just applied to UofL, and Bradley hopes her journey serves as an inspiration.

“This is a second chance for me,” said Bradley, whose grandmother worked at UofL as a custodian. “I didn’t think I deserved help. … I’m very grateful. I don’t think I would have been able to have this much assistance at any other university. When I tell friends and family, they can’t believe it, they’ve never heard of it. And I never expected anything. There’s thousands of students here!”

Other coordinators in the Student Success Center are Eric Turner, Tony Robinson and Toni Robinson.

Check out the video here of students sharing their Student Success Center stories.