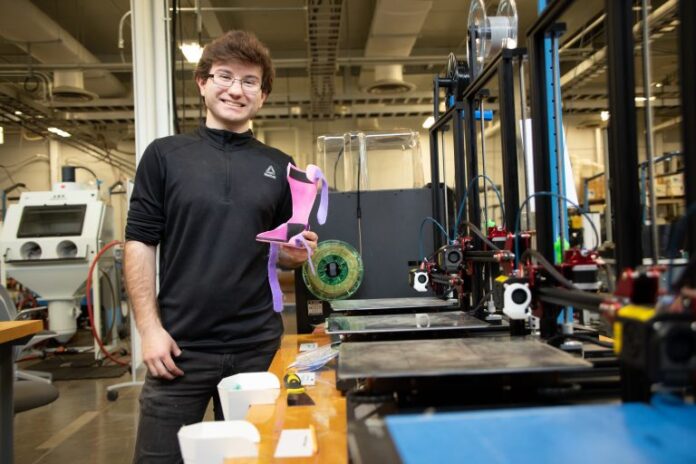 When University of Louisville political science student Caleb He met patient Harleigh Bond and her family at his job at the reception desk at Ronald McDonald House Charities of Kentuckiana (RMHCK), he recognized where he could be of service – and he found just the right resource to help make it happen.

Six-year old Harleigh was 1.4 pounds when born with cerebral palsy and epilepsy and has faced multiple obstacles, including numerous brain surgeries. Her family, from Carter County, Kentucky, stays at RMHCK when Harleigh has doctor and physical therapist appointments or surgeries.

Harleigh’s grandmother, Jatonda Ousley, mentioned to He that she had outgrown the leg braces she needed to continue making development progress in movement and motor skills. With current supply chain issues, the braces were on a waitlist status and not expected until September, as well as being prohibitively expensive for the family. He said that after meeting the family, he realized “little Harleigh deserved everything in the world.”

He researched if he could custom-fit and use 3D printing to manufacture the braces Harleigh needed, but soon realized it might be beyond his expertise. He turned to engineering friends at Speed School of Engineering, who recommended emailing Ed Tackett, director of Advanced Manufacturing Institute of Science and Technology (AMIST) for assistance. “He’s been very enthusiastic about this project,” said He. “It could not have been done without his support and guidance.”

Monday, April 25, 2022, was the special “fitting day” for Harleigh and her family who drove three hours to RMHCK for the occasion. The boot-style brace is appropriately adorned with cartoon characters from the movie “Trolls,” Harleigh’s favorite. Ousley, Harleigh’s primary caretaker, was grateful for the thoughtfulness exhibited by the students. “I greatly appreciate UofL and Caleb for doing it, and Peyton for making the braces,” she said. “We love it and can’t thank you enough.”

Tackett then assigned the project to Chemical Engineering Junior Peyton Deaton, who is currently doing his first co-op rotation at AMIST, and asked if he would figure out how to make it work. Deaton relished the challenge, and used a 3D scan of Harleigh’s leg that He sent to work on a prototype, and after trying three different prototypes, Deaton fashioned the shape that worked.

Ousley explained what the braces will allow for Harleigh, who suffered some setbacks after her latest brain surgery.

“These help her get stronger in the legs, and with the right equipment it will help her to start standing up again, and get back to where she was,” said Ousley. “When Harleigh was being fitted for braces before, she had to be sedated. This is going to help tremendously. You’ve really made a difference.”

Having the shareable and inexpensive technology to make these braces could potentially help thousands of kids with similar issues.

“For families with really good medical insurance, this might not be an issue, but what do we do to help disadvantaged families?” said AMIST Director Ed Tackett. “We can use this technology to provide positive patient outcomes and train students to do this,” he said.

“This was an opportunity where I saw something, connected with people with great expertise and talent and we got something done, and I’m so proud of that,” added He.

As for Harleigh, she’s just happy to have new “Troll shoes.”