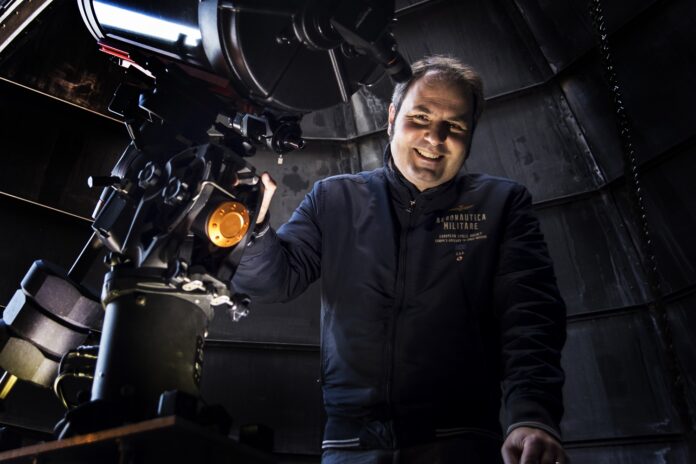 Benne W. Holwerda, associate professor in the University of Louisville Department of Physics and Astronomy, and an international team of researchers have discovered a powerful megamaser – a radio-wavelength laser emission usually indicative of colliding galaxies – that is the most distant such megamaser found so far.

Working on a project called “Looking at the Distant Universe with the Meerkat Array” (LADUMA), the team is using the MeerKAT radio telescope in South Africa to look for neutral hydrogen gas in galaxies that are very, very far away, both in space and in time. By measuring the neutral hydrogen gas in galaxies from the distant past to now, LADUMA will contribute to our understanding of the evolution of the universe.

The discovery was made by LADUMA, led by Holwerda, Andrew Baker of Rutgers University and Sarah Blyth of the University of Cape Town in South Africa, in some of the first data the team obtained from the MeerKAT, which was commissioned in 2019.

“Twelve years ago, we proposed this research and were awarded the time on the MeerKAT radio telescope, which at the time was still under construction,” Holwerda said. “The discovery of this most distant hydroxyl megamaser came out of our hydroxyl maser science group and the data processing from our observing season at the MeerKAT. We expected to see one or two, but seeing one right off the start was a bit of a surprise. It was a neat moment. It is always fun when your data surprises you.”

Galaxies are made of hundreds of billions of stars, gas and dark matter. Under specific conditions, they can cause hydroxyl molecules, made of one atom of oxygen and one atom of hydrogen (OH), to emit a radio signal called an OH maser. A maser is a laser of longer radio waves instead of visible light. When that signal is exceedingly bright, it is called a megamaser. OH megamasers usually are associated with collisions between galaxies, but this particular megamaser was located within a single galaxy.

Sharing the discovery with the South African public, the team put out a call to name the galaxy where the maser took place. They chose the name “Nkalakatha,” an isiZulu word that means “big boss,” suggested by Zolile Tibane, a student studying computer science at the University of the Western Cape.

“We are trying to keep linking the project to South African culture in a respectful way,” Holwerda said. “The project is at its heart South African.”

The project name LADUMA also has special meaning for South Africans. The original proposal was written in 2010 when South Africa was hosting world cup in soccer. Laduma means “it thunders” in the Zulu language and South Africans exclaim “Laduma!” when their team scores a goal in soccer.

The LADUMA project has been a global effort from the beginning, however, including researchers from Australia, Chile, France, Germany, India, Italy, Japan, the Netherlands, South Africa, South Korea, Spain and the United Kingdom as well as the United States.

Holwerda believes the team’s discovery, published by arXiv, is the first of many.

“We are looking forward to all the other discoveries that await us in this MeerKAT data,” he said. “A big project like this is decades in the making. We are now entering the second half and hope to see the things we have been talking about for years. It’s getting exciting.”