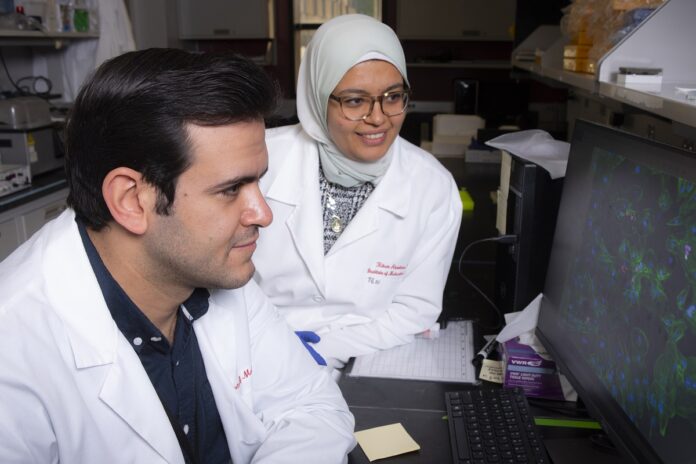 A UofL research team has refined a process in which specific genes administered to heart muscle cells stimulate the cells to divide, with the goal of restoring heart function following a heart attack. Tamer M.A. Mohamed, assistant professor of cardiology, along with colleagues in UofL’s Institute of Molecular Cardiology and elsewhere, have completed preclinical testing that will allow this therapy to be tested in humans as a treatment for certain types of heart failure.

“By inducing proliferation in cardiac heart muscle cells, we hope to be able to treat this deadly disease.” Mohamed said. “In this study, we have demonstrated preliminary efficacy of the transient gene therapy we call 4F in the treatment of ischemic heart failure.”

The most common form of heart disease, ischemic heart disease affects about 18.2 million adults in the United States and caused 360,900 deaths in 2019. Also called coronary heart disease, it is characterized by reduced blood and oxygen flow to the heart due to narrowed arteries, usually caused by a buildup of plaque. When the blood flow to the heart muscle is completely blocked, the patient experiences a heart attack and millions of heart muscle cells die.

The therapy developed by Mohamed’s team involves a combination of four cell-cycle regulator genes, cyclin-dependent kinase 1 (CDK1), CDK4, cyclin B1, and cyclin D1, known collectively as 4F, or four factors. Using 4F, the UofL-led team was able to stimulate the proliferation of heart muscle cells in the lab, leading to improved heart function in animal models for up to four months.

In addition, the proliferation was limited to onecycle, avoiding adverse effects resulting from uncontrolled proliferation, thereby increasing clinical feasibility of the process.

Mohamed Lab researchers in the UofL Institute of Molecular Cardiology, (l. to r.) Qinghui Ou, Xian-Liang Tang, Tamer Mohamed, AbouBakr Salama and Riham Abouleisa Mohamed was part of a team that first identified the potential of the four genes for inducing efficient proliferation of heart muscle cells in 2018. In this most recent work, he and his team further refined the process to use these genes, bringing the technology to treat ischemic heart disease closer to testing in humans. “Transient Cell Cycle Induction in Cardiomyocytes to Treat Subacute Ischemic Heart Failure” was published Jan. 21 in the journal Circulation.

In October, Mohamed and Bradford Hill, professor in the Division of Environmental Medicine, led a team that published research showing that two common food supplements, Nicotinamide (Vitamin B3) and N-acetyl glucosamine (GlcNAc), are essential for heart cell division and improve cardiomyocyte proliferation when included as part of treatment with 4F.

“This discovery will facilitate new avenues to use metabolites which are naturally in our food to regenerate the diseased heart and treat heart failure,” Mohamed said.

The study utilized a biomimetic culture system developed at UofL by Mohamed that keeps slices of human hearts alive for a longer period of time for research. The system mimics the environment of a living organ through continuous electrical stimulation and oxygenation, maintaining viability and functionality of the heart segments for six days, allowing more extensive testing. The heart culture system is available for use by researchers outside UofL.