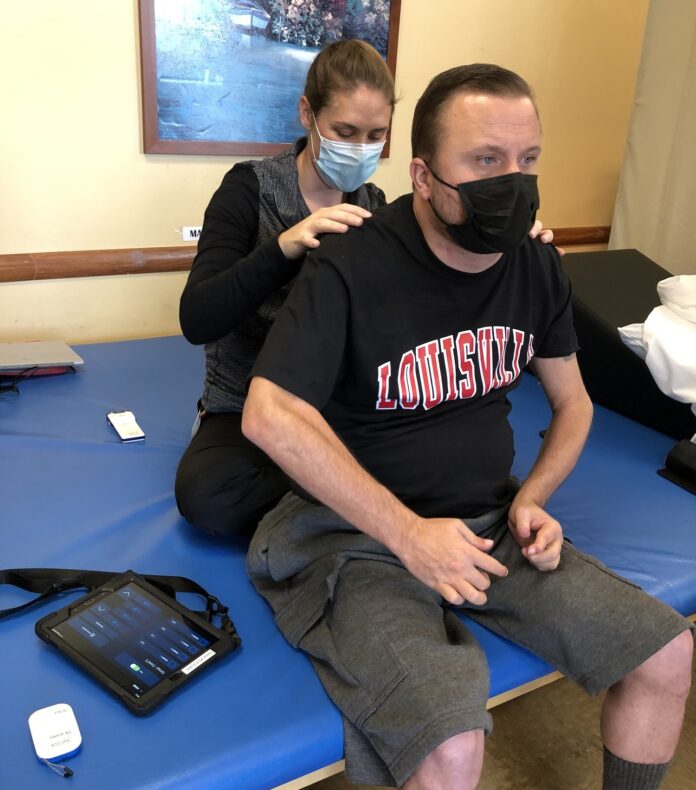 When Keith Smith recently got a new tablet, it wasn’t for watching videos or scanning social media.

Instead, this tablet allows Smith, who has tetraplegia, more independent control of an implanted Medtronic Intellis neurostimulator, allowing him to better take advantage of the stimulator’s benefits for the disabling effects of a spinal cord injury.

“The stimulator has restored my health in a big way. I don’t feel sick all the time anymore. I’m not passing out; I’m not dizzy,” he said. “I am enjoying my life again. It gives me something I can use to fight for my recovery.”

To fully take advantage of the stimulator’s benefits, the stimulator must be adjusted periodically throughout the day to regulate his blood pressure and other functions, each of which requires distinct stimulator settings. Smith, who has limited use of his hands due to a C4-level spinal cord injury, previously had to rely on a caregiver to change the settings due to the small size of the buttons on the standard stimulator controller device.

But now, thanks to the new tablet controller with a larger, touchscreen interface designed with his needs in mind, Smith can adjust settings himself.

“Previously, the remote was controlled by my caregiver. I couldn’t do it because I don’t have [full use of] my hands. Now that we have this new technology, I can control it on my own,” Smith said. “I am going to be able to use many more functions and be able to control it and adjust it in a much more significant manner on my own. It’s a big benefit to my life.”

In addition to a more accessible interface, the updated controller has the capacity to store more setting configurations for immediate use and provides smoother transitions between configurations that allow the person with spinal cord injury to change positions such as from sitting to standing.

Epidural stimulation, an experimental therapy for spinal cord injury recovery, involves implanting an electrode on the lower spinal cord, along with a neurostimulator under the patient’s skin, which delivers mild electrical impulses to the spine. When electrical pulses are delivered in different configurations, research at UofL and other centers has shown they help paralyzed individuals like Smith achieve voluntary movement, blood pressure regulation, the ability to stand, improvements in bowel, bladder and sexual function and other benefits, particularly when combined with activity-based therapy. Some participants even have been able to take steps.

UofL first used Medtronic epidural stimulators for spinal cord injury research in 2009 under an FDA Investigational Device Exemption. The research, led by Susan Harkema, professor of neurological surgery and associate director for KSCIRC, has resulted in multiple health benefits and function recovery for paralyzed individuals. While epidural stimulators, also known as spinal cord stimulators, have been proven to provide effective relief for chronic pain and are commercially available for this application, their use for individuals with spinal cord injury remains experimental.

The new controller, known as Stim X Release 1, also offers added benefits for the researchers by precisely recording stimulation use by the participants outside the lab.

“This is Release 1 and we expect future releases to continue to improve the technology,” said Claudia Angeli, assistant professor of bioengineering at UofL’s J.B. Speed School of Engineering and director of the Epidural Stimulation Program at KSCIRC. “Additional improvements are planned with feedback from the participants and the development of wireless sensors to monitor the user’s condition and adjust stimulator settings as needed. In a closed-loop or human-in-the-loop system, the controller could alert the user or adjust the stimulation based on a change in blood pressure, for example.”

UofL, Kessler Foundation, Medtronic, Johns Hopkins Applied Physics Laboratory and multiple funders are working together to fast-track technology improvements that allow individuals with spinal cord injury to realize the benefits of epidural stimulation in their homes and communities, not just in the research setting.

“This is the sort of innovation a Carnegie Research-1 university can and ought to be doing,” said Kevin Gardner, UofL’s executive vice president for research and innovation. “This is innovation with real, human impact – work that advances health and helps people live lives that are healthier, more resilient and more fully empowered.”