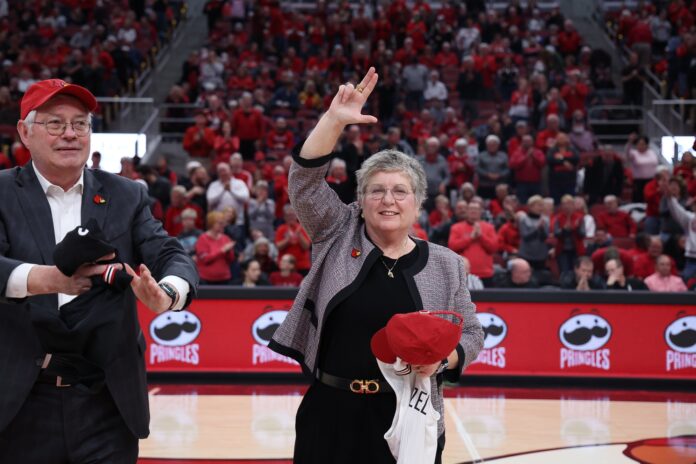 Kim Schatzel, a nationally recognized leader with extensive experience in both higher education and the private sector, has been chosen as the 19th president of the University of Louisville.

The UofL Board of Trustees voted unanimously to appoint Schatzel during a special meeting on Nov. 30. Schatzel has served since 2016 as president of Towson University (TU), one of 12 universities that are part of the University System of Maryland. She also is a professor of marketing.

Schatzel, 66, who previously served as provost of Eastern Michigan University and dean of the College of Business at the University of Michigan-Dearborn, will officially assume the UofL presidency on Feb. 1, 2023. She succeeds Lori Stewart Gonzalez, who has served as interim president since December 2021 and will be returning to her previous leadership role as executive vice president and university provost for UofL.

During her first remarks on campus, Schatzel pledged to start her tenure as president by going on a discovery tour, listening and learning about the Cardinal community.

“Leadership is a team sport, especially when it comes to such a complex and innovative organization like the University of Louisville,” she explained, promising to work closely with faculty, staff, students, alumni, donors, elected officials, businesses and community partners “to expand UofL’s already tremendous impact and address the great challenges of today.”

With a 6-year graduation rate of 72 percent, Towson University has the second highest graduation rate in the University System of Maryland. In 2022, 57 percent of its students identified as underrepresented minorities, and TU is one of few universities in the nation where Black, Latinx and Pell-eligible students achieve the same graduation rate as the overall student population.

Schatzel is a member of the Presidents’ Alliance on Higher Education and Immigration and the Presidents’ Trust of the Association of American Colleges and Universities (AAC&U).  In 2017, she was honored by Maryland’s Associated Black Charities as their “Champion for More in the Middle” for her leadership in advancing diversity and inclusion at TU.

In 2020, Schatzel was honored with the Whitney M. Young Jr. Award. Given by the Board of Directors of the Urban League affiliates across the country, the award is in memory of the civil rights leader and former head of the National Urban League. The award honors members of the Baltimore community committed to advancing diversity, equity and inclusion in its region and Maryland.

During her tenure as Towson University’s president, the University System of Maryland, Maryland General Assembly and Maryland’s Office of the Governor supported $1 billion in capital investment to advance academic instruction and research, student life and athletics at TU – the most in its 166-year history. Those investments included a new Science Complex, the renovation and expansion of the University Union, a new College of Health Professions Building, acquisition of an office building in downtown Towson to house several university functions such as IT and Advancement, and new field hockey and women’s soccer stadiums that comprise the largest investment in women’s athletics in TU’s history.

“The University of Louisville is a historic university with rich traditions that provides leadership to Kentucky as the premier metropolitan research university for the Commonwealth,” Schatzel said. “I am incredibly honored to be chosen to lead such a remarkable institution and look forward to working together with our campus and community partners to advance UofL’s reputation as a pre-eminent institution nationally recognized for its excellence in research and scholarly work, education, inclusive student success, innovation, the arts and athletics – all aimed to establish the University of Louisville and the City of Louisville as a nexus for transformative solutions that advance the public good.

“My husband Trevor and I are thrilled to be joining the UofL community and look forward to embracing the university community, the City of Louisville and the Commonwealth of Kentucky as our new home. And we look forward to joining the more than 150,000 UofL alumni from around the globe in cheering on our Cardinals.”

Schatzel, who is a first-generation college student herself, was born in New York and earned a bachelor’s degree in biology and economics at Washington University in St. Louis, where she received significant support in the form of scholarships to complete her degree. She earned a doctorate in business administration, with concentrations in marketing and management of technology, from Michigan State University. She has taught at Boston College and the University of Michigan – Dearborn.

Schatzel currently serves as the Vice-Chair of the Board of Directors for the Colonial Athletic Conference (CAA), a premier mid-major conference that Towson University competes in with 19 Division I athletics teams. She also served as the CAA representative to the NCAA Division I Presidential Forum.

Schatzel navigated a non-traditional path to higher education leadership. She is one of less than two percent of university presidents who have significant business and private sector experience, spending more than 20 years as a corporate leader and serial entrepreneur in the technology and advanced manufacturing sectors. As part of her new venture experience, Schatzel founded and served as the president, chief operating officer, and later CEO of a multinational advanced manufacturing firm, working with the OEM automotive industry, with more than 1,500 employees on four continents.

Her leadership contributions have been recognized by Maryland’s business publication The Daily Record, which named her one of the Most Admired CEOs in 2017 and 2022 and recognized her with its 2018 Icon Awards. She has been named to the Most Influential Marylanders list in both 2017 and 2021.

“Dr. Schatzel brings the best of many worlds to the UofL community,” said Mary Nixon, UofL Board of Trustees chair. “Her impressive climb through the academic ranks, as well as her extensive experience both in the business community and in health care, make her uniquely qualified to lead the university into our next chapter as Kentucky’s premier metropolitan research university.”

Schatzel’s husband of 39 years, Trevor Iles, is a lecturer in the department of marketing at Towson University. They have two adult children – son Matthew, his wife Katie and their two-year-old son Forest, and daughter Katie and her husband Carson, who are expecting their first child in January 2023.